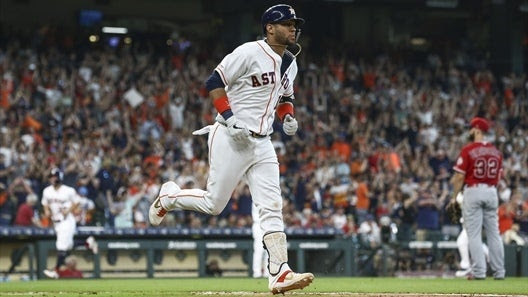 Yuli Gurriel was an all-around champ this week, as he blasted 6 HRs, logged 13 RBIs, and batted .429.

DEADZONES had the biggest jump in the rankings thanks to Yuli Gurriel.

Kevin Kiermaier is the main reason for MASTERBLASTERS’s jump in the rankings, as he swiped 3 bases, put up 5 RBIs, and batted .350.

SCHNOOKERS have been enjoying the services of Matt Olson, who has given them seven straight weeks of above-average roto performance.

SHAMS have now moved up a total of five slots over the past five weeks.

5 (5) TEABAGGERS
TEABAGGERS put up a .325 BA, 5 stolen bases, and 12 home runs, but stayed in the same spot this week due to a horrible performance in the saves category.

Miguel Cabrera is on a nice trajectory for Colt 45s, improving his performance in our roto player metric for three straight weeks.

Rafael Devers may not have been named an All-Star but he’s heading into the break leading all other American League third basemen in batting average (.331), slugging percentage (.561) and weighted on-base average (3.93).

Coaches Jim Rodrigues and Paul Keriazes are having their patience tested by Sandy Leon, who has been the worst starter in the league over the past three weeks.

After only coming up with 0 wins, 0 saves, and a 1.56 WHIP, we peg DEADWOODS as the least powerful team around.