Around the League: Period 16 Recap

SALUKIS did their part to help other player’s batting statistics this week, putting up a 6.47 ERA. Coach Moynihan can blame the poor result on Glenn Sparkman, Daniel Norris, and Reynaldo Lopez, who together posted a 11.17 ERA in 19 and 1/3 innings. Lopez’s performance this week broke his four game streak of surpassing his projections. As a result, SALUKIS held on to their 12th place position in the ERA rankings, 0.92 ERA behind DEADZONES. SALUKIS have now crawled out of the basement and into 11th place overall.

That Will Leave a Mark 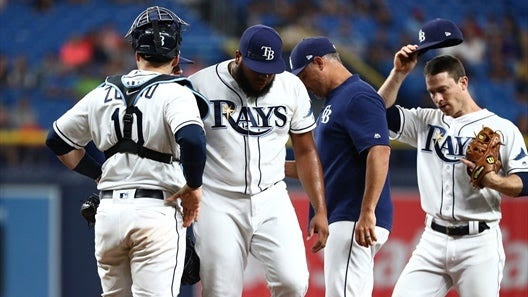 SHAMS weren’t messing around when it came to wins this week, posting 5 of them. Unfortunately, more good performances in that category are going to be harder to come by due to some bad personnel news. Jose Alvarado will be out for two to six weeks after leaving Saturday’s match-up with the Yankees due to a strained right oblique.

Next Time, I’ll Even Try

DEADZONES had a good week in the RBIs category this week despite some lineup imperfections. They produced the week’s 3rd best performance in the RBIs category without taking advantage of 7 RBIs from bench-rider Adalberto Mondesi. No other player riding the pine did better. DEADZONES moved up from 3rd to 2nd in the RBIs standings.

Jason Castro had been quiet in the batting average category since week eleven’s performance, but finally awoke from his slumber this week. Castro batted .545 while leading Colt 45s to a .294 BA overall. His batting average performance this week ended a four week streak of failing to perform at a league average level in that category. Colt 45s moved up the batting average standings for the 2nd straight week, going from 3rd to 2nd.

CITY SLICKERS II put up a rare bad effort in the home runs category this week. They were more sluggish than slugging , combining for a measly three homeruns. They had a league low three players who contributed anything in that category. Dwight Smith was one of the eleven no shows. That caused CITY SLICKERS II to drop two spots in the HRs standings (now 4th).