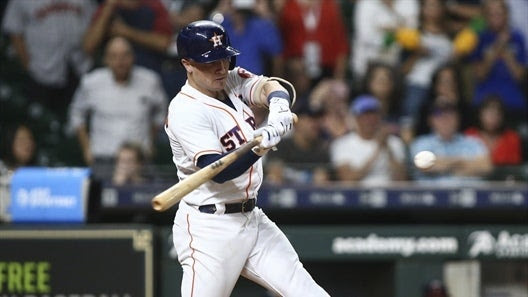 Photo by USATSISCHNOOKERS got the league’s top RBI performance this week from Alex Bregman. Bregman tallied 9 RBIs while leading SCHNOOKERS to 55 RBIs overall. He got to 30 home runs on Saturday, and probably reached that same number in impressive dugout celebrations. SCHNOOKERS stayed in 2nd place in the RBIs standings. Same As It Ever Was

Another week goes by, and yet again MASTERBLASTERS does well in stolen bases while having issues in ERA. In the stolen bases category, they moved into 2nd place this week after putting up 6 stolen bases. Meanwhile, in the ERA category, their 6.02 ERA caused them to drop two spots into 12th place.

SKINS remains in 7th place overall for the 6th straight week, despite some sub-par performances. They dropped in six stat categories, including moving down one spot in batting average. It will be difficult for Coaches Mark Hodgkins and Frank Grzegorzewski to fault any one player for the result. SKINS were brought down by eight underperformers, the worst of whom was Nicky Delmonico (a .077 BA). Unfortunately, more bad performances might be on tap for Delmonico, who has seen his batting average performance deteriorate in each of the last three weeks.