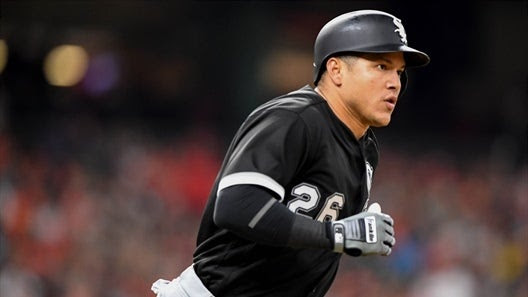 Avisail Garcia was an all-around champ this week, as he swiped 3 bases, banged out 2 HRs, and tallied 5 RBIs.

CITY SLICKERS II had the biggest jump in the rankings thanks to Avisail Garcia.

DEADZONES have been enjoying the services of Adalberto Mondesi, who has given them seven straight weeks of above-average roto performance.

Only coming up with 1 stolen base, a 1.31 WHIP, and a .242 BA caused DEADWOODS to careen down three spots in our power rankings.

SCHNOOKERS dropped and no one is more to blame than Homer Bailey, who tallied a 27.00 ERA, notched a 3.60 WHIP, and won 0 games.

Alex Gordon is on a disturbing slide, doing worse in our roto player metric in each of the last three weeks.

Around the League: Period 10 Recap 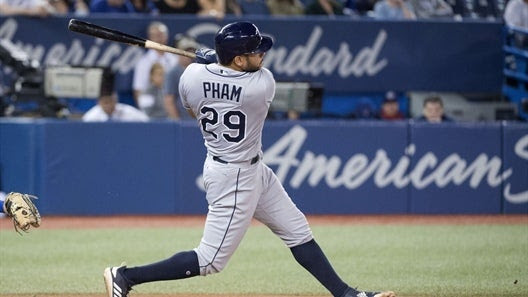 Photo by USATSITommy Pham was probably in Coaches Mark Hodgkins and Frank Grzegorzewski’s doghouse after last week’s 0 RBI ‘performance’. He might be let out now. Pham racked up 7 RBIs while leading SKINS to 35 RBIs overall. His performance this week stopped his four game streak of not meeting his projections. Nevertheless, SKINS stayed in 9th place in the RBIs standings. 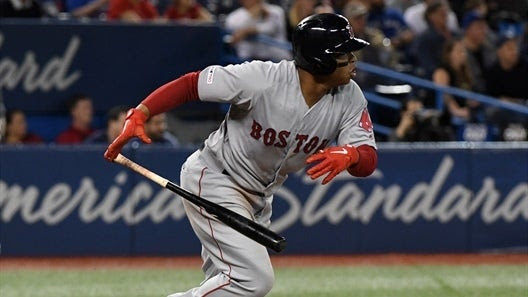 DEADZONES dominated the home runs category this week, blasting 16 of them. Rafael Devers separated himself from the rest of the crew on DEADZONES, cranking out 4 HRs to go along with 8 RBIs and a .481 BA in 27 at bats. Devers blasted four home runs this week and was likely robbed of another when he skied one into the roof of Minute Maid Park. DEADZONES jumped up one spot and into 3rd in the HRs standings, 7 HRs behind SPACE COWBOYS. That was the good news unfortunately, as DEADZONES fell from 2nd to 4th in the overall rankings.

Hard to believe, but SALUKIS used to be in 2nd place in the wins standings. That was back in week three. Unfortunately, things have gone downhill since. They fell down two spots to 11th place this week after winning only 1 game. Coach Moynihan’s squad suffered from eight zeros in that category, one of which came from Reynaldo Lopez, who also sported a 19.64 ERA and notched a 2.45 WHIP.

Colt 45s held on to their spot in 2nd place overall this week. Next week, however, they may have trouble pulling off that same feat. They are in serious danger of falling down in five separate categories- RBIs, home runs, saves, wins, and WHIP. Falling back in each of those spots would leave Colt 45s with 63 category points overall, and likely put them in 4th place.

SPACE COWBOYS showed, once again, how it’s supposed to be done this week. They topped all other teams for the week, earning 71 category points. Coach Denton’s squad pulled off an impressive feat this week, coming in first in home runs, wins, and ERA with 19 HRs, 4 wins, and a 2.50 ERA. As a result, SPACE COWBOYS moved up in the overall rankings from 5th to 3rd.

DEADWOODS had the biggest jump in the rankings thanks to C.J. Cron.

Coming up with a 1.05 WHIP, 13 HRs, and 35 RBIs allowed DEADWOODS to rocket up five slots in the power rankings.

Coach Kelly are having their patience tested by Kelvin Herrera, who has been the worst starter in the league over the past three weeks.

DEADZONES have been enjoying the services of Adalberto Mondesi, who has given them seven straight weeks of above-average roto performance.

Only coming up with 0 wins, 1 save, and a 1.33 WHIP caused MASTERBLASTERS to careen down three spots in our power rankings.

CITY SLICKERS II had the worst performance of any team this week, which predictably led to a power rankings drop.

8 (8) SHAMS
Cameron Maybin is on a disturbing slide, doing worse in our roto player metric in each of the last three weeks.

Hansel Robles is the main reason for SKINS’s jump in the rankings, as he posted 2 saves and put up a 0.00 WHIP.

Around the League: Period 9 Recap

Leave the Past Behind 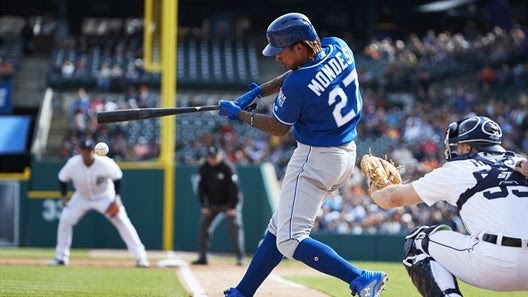 Photo by USATSIDEADZONES’s 9th place stolen bases ranking back in week three is a distant memory these days. They moved into 2nd place this week after swiping 6 bases. Adalberto Mondesi was the key contributor for DEADZONES, swiping 4 bases to go along with 4 RBIs and a .348 BA in 23 at bats. Those 4 stolen bases were the most that any player collected this week. 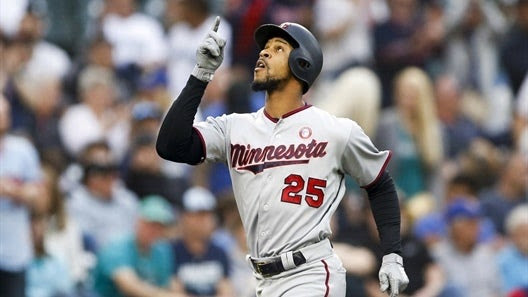 SALUKIS had themselves a fine week in the home runs category, blasting 12 of them. Three players (Byron Buxton, Jordan Luplow, and Gleyber Torres) delivered for SALUKIS, getting 9 of their team’s 12 HRs. Buxton hammered a grand slam Saturday to pile on the runs during an 18-4 drubbing of the Mariners. SALUKIS moved up from 9th to 7th in the HRs standings, 3 HRs behind SCHNOOKERS. SALUKIS have also now crawled out of the basement and into 10th place overall. 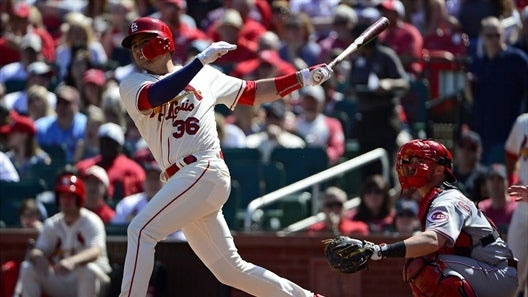 After last week’s .189 BA effort, it looks like SKINS were able to regroup. They were hitting off tees this week, batting .284. Coaches Mark Hodgkins and Frank Grzegorzewski’s squad relied heavily on Aledmys Diaz, who batted .500 to go along with 2 home runs and 4 RBIs. Diaz’s performance pushed SKINS from 10th to 9th in the batting average standings.

CITY SLICKERS II aren’t going to stay in contention if they have a few more weeks like this one. They were bringing up the rear this week, coming up with only 28.5 category points. CITY SLICKERS II wound up in last place for the week in batting average and stolen bases by putting up a .225 BA and 0 stolen bases, and also finished 11th in RBIs and home runs. They are tops in the league overall.

Race to the Bottom

ARMCHAIR SLUGGERS fell down the overall standings for the 2nd straight week, moving from 10th to 12th. They dropped due to slides in three stat categories, including a one spot fall in RBIs. Coaches Jim Rodrigues and Paul Keriazes’ squad suffered from seven zeros in that category, one of which came from Guillermo Heredia, who also batted .000 and stole 0 bases. Heredia might be heading back to the waiver wire after getting picked up before this game. 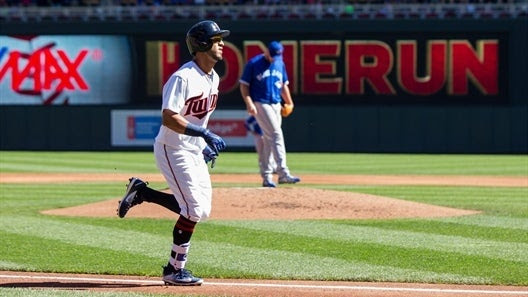 Eddie Rosario was an all-around champ this week, as he totaled 7 RBIs, blasted 2 HRs, and swiped 1 base.

Colt 45s had the biggest jump in the rankings thanks to Eddie Rosario.

SCHNOOKERS have been enjoying the services of Aroldis Chapman, who has given them seven straight weeks of above-average roto performance.

Only coming up with a .228 BA, 3 stolen bases, and 29 RBIs caused SPACE COWBOYS to careen down three spots in our power rankings.

George Springer is the main reason for DEADZONES’s jump in the rankings, as he clobbered 5 home runs, notched 10 RBIs, and batted .519.

DEADWOODS’s performance this week was a big turnaround from last week’s disappointment, allowing them a bump in the power rankings.

SHAMS have now had to deal with six straight weeks where Hanser Alberto has underperformed his positional average.

Gleyber Torres is on a nice trajectory for SALUKIS, improving his performance in our roto player metric for three straight weeks.

After only managing 1 stolen base, a 1.55 WHIP, and 1 win, we peg ARMCHAIR SLUGGERS as the least powerful team around.

SHAMS had the biggest jump in the rankings thanks to Mitch Moreland.

Putting up a 0.87 ERA, a 0.85 WHIP, and 40 RBIs allowed SPACE COWBOYS to rocket up three slots in the power rankings.

3 (3) MASTERBLASTERS
Justin Bour is on a disturbing slide, doing worse in our roto player metric in each of the last three weeks.

Kevin Plawecki failed to outperform the average player at his position this week, which has been a season long trend Coach Kelly have had to contend with.

SCHNOOKERS dropped and no one is more to blame than Tyson Ross, who recorded a 33.75 ERA, tallied a 6.75 WHIP, and won 0 games.

SHAMS’s performance this week was a big turnaround from last week’s disappointment, allowing them a bump in the power rankings.

Adalberto Mondesi is the main reason for DEADZONES’s jump in the rankings, as he stole 3 bases and racked up 8 RBIs.

ARMCHAIR SLUGGERS managed to move up in the real rankings this week, but the team’s performance didn’t look good in our metrics.

Domingo Santana’s hot start is now officially in the rear view mirror, as he went 0-4 four times in a five-day span last week.

TEABAGGERS is moving up largely on the strength of their performance in the batting average category, where they have batted .279 over the past three weeks.

SKINS just stumbled to the worst three week run of any team this season.

After only coming up with 0 wins, 0 saves, and a 1.98 WHIP, we peg SALUKIS as the least powerful team around.

Around the League: Period 7 Recap 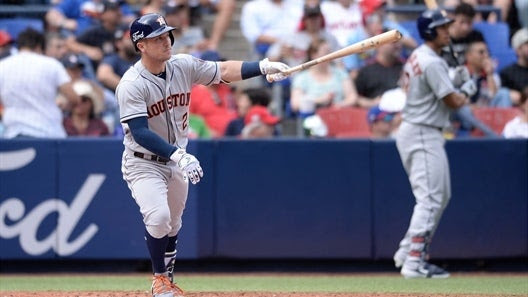 Photo by USATSISCHNOOKERS got the league’s top RBI performance this week from Alex Bregman. Bregman produced 10 RBIs while leading SCHNOOKERS to 28 RBIs overall. He smashed a grand slam south of the border Sunday for his fifth home run of the week. SCHNOOKERS moved up from 10th to 8th in the RBIs standings, 8 RBIs behind ARMCHAIR SLUGGERS. Unfortunately though, SCHNOOKERS fell from 5th to 6th in the overall rankings. 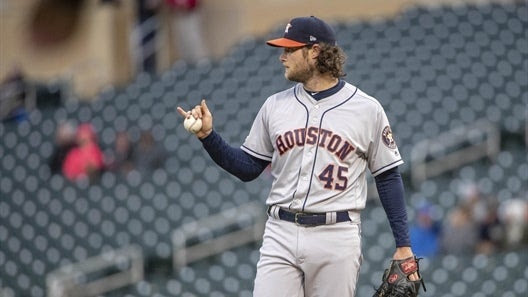 MASTERBLASTERS can happily forget their 11th place ranking in the WHIP standings five weeks ago. They moved into 1st place this week after putting up a 0.90 WHIP. Coaches Colin Scoggins and keith mckinley’s squad did well with a balanced effort, as four players outperformed the league average. Gerrit Cole was the best of the bunch, racking up a 0.57 WHIP in 7 innings. Cole threw seven scoreless innings Tuesday against the Twins to bring his ERA back down below four on the year. 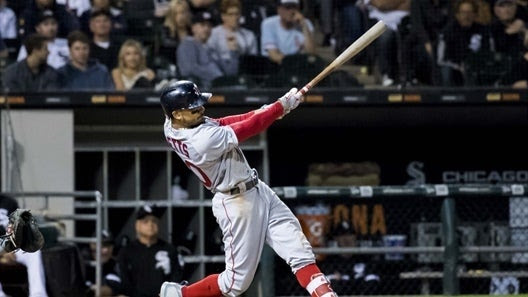 Nothing got past TEABAGGERS‘s batsmen, who had a .303 batting average this week. That performance was enough to put TEABAGGERS in the top spot for BA. TEABAGGERS were led by the three-headed-monster of Mookie Betts, Michael Chavis, and James McCann, who together hit .408. That pushed TEABAGGERS from 7th to 3rd in the batting average standings.

SHAMS made a move in the only category that really counts this week, going from 9th to 7th in the overall standings. They did well in three stat categories, including a two spot rise in ERA. Coach Dillon’s squad got three clean sheets (among qualified players) in the ERA category, with Mychal Givens, Mike Minor, and Brandon Workman posting a 0.00 ERA. Givens’ performance this week ended a four game streak of failing to hit his projections.

Rule by the Few

Colt 45s couldn’t keep things going after last week’s 13 home run effort. They stumbled their way to recording only 4 HRs this week. They had a league low three players who contributed anything in that category. Tyler Wade was one of the eleven no shows. No surprise then, Colt 45s fell from 7th to 9th in the HRs standings. Things weren’t better in other categories, as they fell from 2nd to 3rd in the overall rankings.