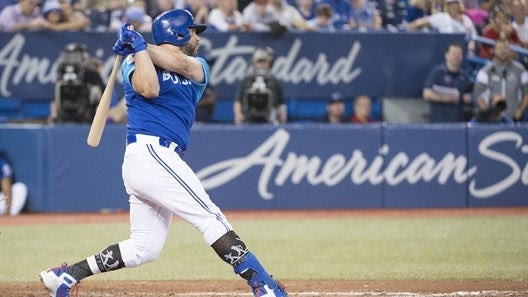 Kendrys Morales was an all-around champ this week, as he cranked out 7 HRs, recorded 12 RBIs, and batted .478.

MASTERBLASTERS had the biggest jump in the rankings thanks to Kendrys Morales.

SKINS have moved up a total of eight slots over the past five weeks.

Only coming up with 0 stolen bases, 23 RBIs, and a 5.00 ERA caused SPACE COWBOYS to careen down three spots in our power rankings.

Sergio Romo is the main reason for ARMCHAIR SLUGGERS’s jump in the rankings, as he racked up 2 saves and sported a 0.00 ERA.

SHAMS have been enjoying the services of Jose Alvarado, who has given them seven straight weeks of above-average roto performance.

SMOKING GUNS dropped and no one is more to blame than Hector Velazquez, who sported a 27.00 ERA, tallied a 4.13 WHIP, and totaled 0 saves.

SALUKIS hasn’t had an above average team performance in four weeks.

12 (12) DEADZONES
DEADZONES have now been hanging out down here for nine consecutive weeks. 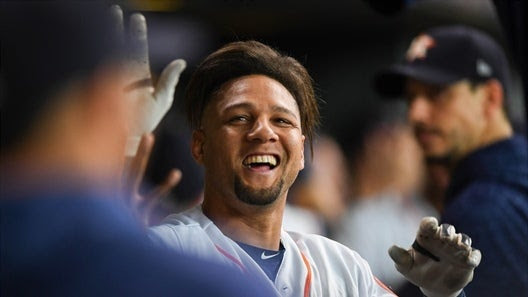 Yuli Gurriel was an all-around champ this week, as he cranked out 2 HRs, totaled 5 RBIs, and swiped 1 base.

SCHNOOKERS had the biggest jump in the rankings thanks to Yuli Gurriel.

Putting up 41 RBIs, 12 home runs, and 4 wins allowed SCHNOOKERS to rocket up four slots in the power rankings.

3 (3) Colt 45s
Jake Bauers is on a disturbing slide, doing worse in our roto player metric in each of the last three weeks.

TEABAGGERS have now had to deal with seven straight weeks where Ehire Adrianza has underperformed his positional average.

ARMCHAIR SLUGGERS dropped and no one is more to blame than James Paxton, who sported a 27.00 ERA, notched a 6.00 WHIP, and won 0 games.

SKINS have been enjoying the services of Kole Calhoun, who has given them seven straight weeks of above-average roto performance.

Chris Sale’s recent pitching performance hasn’t been hurting at all, but apparently his shoulder has been. He’s back on the DL with inflammation.

SALUKIS is moving up largely on the strength of their performance in the HRs category, where they have banged out 42 HRs over the past three weeks.

12 (12) DEADZONES
DEADZONES hasn’t had an above average team performance in thirteen weeks.

Around the League: Period 21 Recap

Catch Me if You Can! 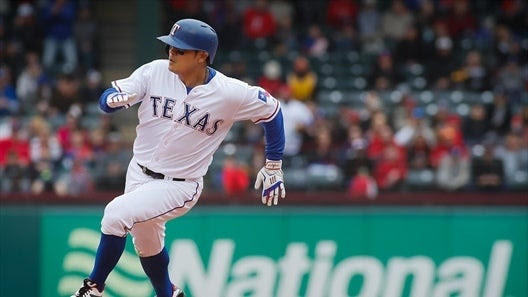 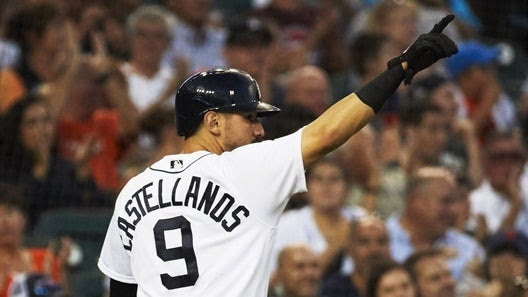 Nicholas Castellanos had been fairly quiet in the RBIs category since week fourteen’s performance, but finally awoke from his slumber this week. Castellanos posted 10 RBIs while leading SPACE COWBOYS to 59 RBIs overall. He put together a five hit, five RBI game on Monday against the White Sox. SPACE COWBOYS stayed in 1st place in the RBIs standings. 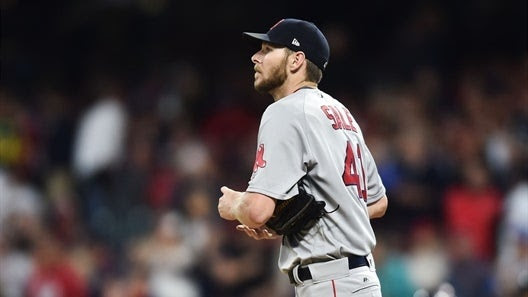 DEADWOODS put up big numbers in a category where big numbers are big trouble, sporting a 5.05 ERA. Coaches Francis Bujak and Guy Mawhinney might be seeing more bad performances in that category due to some bad personnel news. Despite having pitched well in his last start, Chris Sale will be headed back to the DL with another shoulder injury.

Coach Stetz’s gameday decisions have been some of the worst in the league this season, and this week he showed why. He went with Chad Pinder instead of Mikie Mahtook, even though the CBS projections pegged Mahtook as the better call. That ended up being costly, as Pinder put up 0 RBIs to go along with 0 stolen bases and a .083 BA, while Mahtook recorded 7 RBIs to go along with 2 home runs. That difference really hurt, as DEADZONES tallied only 24 RBIs this week.

SMOKING GUNS had a week to forget, sporting a 6.46 ERA. They were practicing their manners as they put every other team ahead of themselves in the ERA category this week. Justin Anderson loomed large in the result, totaling a 15.43 ERA in 2 and 1/3 innings. Despite that, SMOKING GUNS held on to their 6th place position in the ERA rankings, 0.13 ERA behind SKINS. SMOKING GUNS fell from 8th to 9th in the overall rankings. 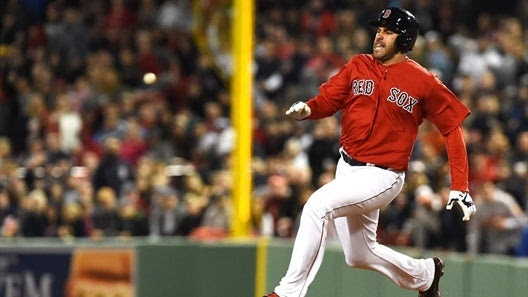 TEABAGGERS had the biggest jump in the rankings thanks to J.D. Martinez.

1 (1) SPACE COWBOYS
Edwin Diaz is right on pace to match K-Rod’s record of 62 saves, but Diaz is doing it with a lower ERA and a better strikeout to walk ratio.

Mookie Betts picked up the first cycle of 2018 in a loss versus the Blue Jays on Thursday.

Colt 45s put up big numbers last week, and followed that up with yet another huge performance this week.

ARMCHAIR SLUGGERS have been enjoying the services of Sergio Romo, who has given them seven straight weeks of above-average roto performance.

Coming into this week, DEADWOODS hadn’t been truly terrible in the stolen bases category in any week this season. That streak of avoiding bad performances just came to a screeching halt.

Justin Verlander has fallen off a bit since his Cy Young worthy start, and the frustration might be getting to him as he got kicked out of his start against the Mariners.

7 (7) SKINS
Marcus Semien is on a nice trajectory for SKINS, improving his performance in our roto player metric for three straight weeks.

9 (9) SALUKIS
SALUKIS posted 21 home runs this week, which is the best mark of the season for any team.

11 (11) MASTERBLASTERS
MASTERBLASTERS’s performance two weeks ago was in the bottom 20th percentile for the season, and so was last week’s.

12 (12) DEADZONES
DEADZONES hasn’t had an above average team performance in twelve weeks.

Around the League: Period 20 Recap

SMOKING GUNS has now improved their overall ranking each week for the past two straight weeks. They rose up due to good performances in two categories, including a two spot jump in batting average. Ronald Guzman and Willy Adames were the prime movers for SMOKING GUNS, batting .500 and a .478 BA, respectively. Guzman’s performance this week stopped his four game streak of not meeting his projections. 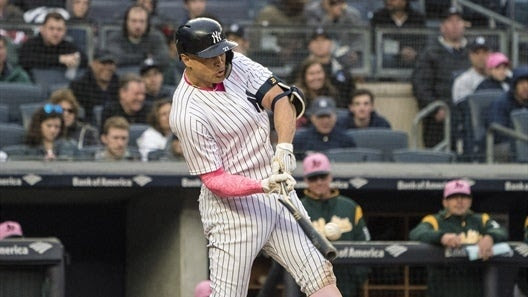 SALUKIS got the league’s top home run performance this week from Giancarlo Stanton. Stanton clobbered 5 HRs while leading SALUKIS to 21 HRs overall. He hit the hardest ball anyone has hit in three years when he launched this homer 449 feet. SALUKIS jumped up two spots and into 2nd in the HRs standings, 23 HRs behind SPACE COWBOYS. That was the good news unfortunately, as SALUKIS fell from 8th to 9th in the overall rankings.

One Step Forward, One Step Back

SPACE COWBOYS‘s bats were working overtime this week, unfortunately their performance on the mound couldn’t match it. They pulled off an impressive feat, coming in first in RBIs, batting average, and stolen bases with 47 RBIs, a .299 BA, and 10 stolen bases. Meanwhile, SPACE COWBOYS’s pitchers finished in last place in wins with 0 wins, and also finished 10th in WHIP.

The 1st week of the season found DEADZONES in 1st place in the WHIP standings. Since then things have been…not so good. They fell down one spot to 8th place this week after racking up a 1.45 WHIP. Trevor Hildenberger stuck out as the worst performer, tallying a 3.38 WHIP in 2 and 2/3 innings. Hildenberger has recorded the worst WHIP of any starting player over the last three weeks.

SMOKING GUNS had the biggest jump in the rankings thanks to Whit Merrifield.

1 (1) SPACE COWBOYS
It’s always nice when you have a player who pulls off an offensive feat that has never been done before, which is what happened when Rougned Odor walked five times and hit a home run on Thursday.

2 (2) SCHNOOKERS
SCHNOOKERS put up big numbers last week, and followed that up with yet another huge performance this week.

3 (3) DEADWOODS
Adeiny Hechavarria is on a disturbing slide, doing worse in our roto player metric in each of the last three weeks.

Colt 45s have been the best in the league this season in the WHIP category, and topped the league in that category again this week.

ARMCHAIR SLUGGERS dropped and no one is more to blame than Sonny Gray, who sported a 23.63 ERA, tallied a 3.75 WHIP, and won 0 games.

Whit Merrifield is the main reason for SMOKING GUNS’s jump in the rankings, as he hit .478, swiped 3 bases, and banged out 2 home runs.

Only coming up with 0 saves, a 7.88 ERA, and a 1.65 WHIP caused MASTERBLASTERS to careen down three spots in our power rankings.

12 (12) DEADZONES
DEADZONES hasn’t had an above average team performance in eleven weeks.

Around the League: Period 19 Recap 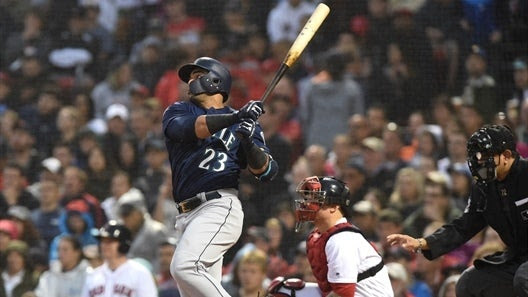 Photo by USATSIARMCHAIR SLUGGERS can happily forget their 10th place ranking in the RBIs standings eighteen weeks ago. Their 37 RBI performance pushed them into 3rd place this week. Coaches Jim Rodrigues and Paul Keriazes’ squad had two main stars in Nelson Cruz and Mark Trumbo, who together produced 19 RBIs. Cruz’s 10 RBIs were the most of any designated hitter this week. 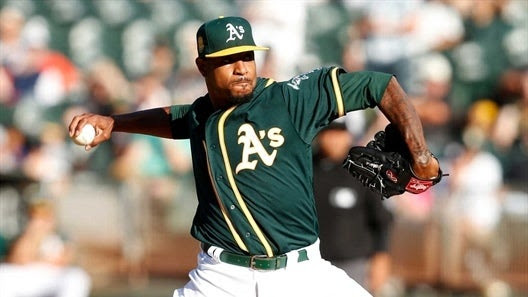 TEABAGGERS made up for their lackluster 7.83 ERA performance last week with a top-notch performance in the category this week. They came through to the tune of a 2.43 ERA. Coaches Kent Johnson and Patrick Whelan’s squad got two clean sheets (among qualified players) in the ERA category, with Edwin Jackson and Corey Kluber posting a 0.00 ERA. As a result, TEABAGGERS are no longer the worst team in the ERA standings.

SCHNOOKERS are contenders for the title because of weeks like this. They topped all other teams for the week, earning 73 category points. Coach Schneller’s squad won the week in RBIs and ERA after putting up 39 RBIs and a 1.82 ERA, while also finishing in 2nd in batting average, saves, and wins. SCHNOOKERS stayed in 2nd place in the overall standings this week.

SKINS moved up the overall rankings for the 2nd straight week, going from 8th to 7th. They did well in three stat categories, including a one spot rise in batting average. Isiah Kiner-Falefa separated himself from the rest of the crew on SKINS, hitting .571. Life for SKINS was hardly perfect however, as SKINS got poor results in two stat categories, including a two spot drop in WHIP.

MASTERBLASTERS‘s ERA was more LOL this week as it rounded out to a pitiful 7.88. They were practicing their manners as they put every other team ahead of themselves in the ERA category. Yefry Ramirez was clearly the weakest link for Coaches Colin Scoggins and keith mckinley and the gang as he sported a 14.85 ERA in 6 and 2/3 innings. No surprise then, MASTERBLASTERS now sits at the bottom of the ERA standings, 0.01 ERA behind SHAMS. In addition, MASTERBLASTERS fell from 9th to 10th in the overall rankings.