Skip to content
Check out this article to see information, stats, and recaps from the league’s action this week. 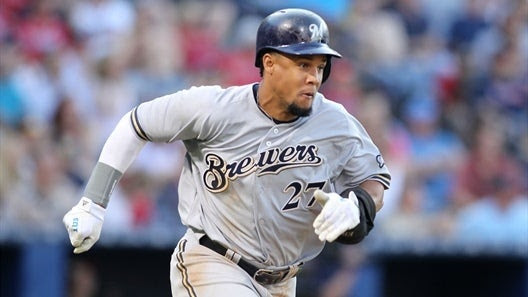 Photo by USATSISCHNOOKERS is stuck in 11th place overall for the 3rd straight week, despite making some progress. They improved their rank in four stat categories, including moving up three places in home runs. They had more players helping out in the category than any other team, with Carlos Gomez (4 HRs) being the best of twelve contributors. Those 4 HRs were the most of any player this week.

DEADWOODS got more of the performances that had them moving up the overall standings in each of the previous three weeks. They did well in four stat categories, including a two spot rise in ERA. Coaches Francis Bujak and Guy Mawhinney’s squad got two clean sheets (among qualified players) in the ERA category, with Keone Kela and Jose Quintana posting a 0.00 ERA. That helped DEADWOODS move up from 8th to 6th in the ERA standings.

SMOKING GUNS suffered a bad case of WHIPlash this week with a sorry 1.76 WHIP. Matt Bush and Matt Strahm were the captain and first mate on the good ship failboat. Together they produced a 2.85 WHIP in 6 and 2/3 innings. Strahm’s performance this week definitively ended a four game streak of beating the experts’ projections. Nevertheless, SMOKING GUNS held on to their 8th place position in the WHIP rankings, 0.02 WHIP behind SALUKIS. SMOKING GUNS fell from 3rd to 4th in the overall rankings.

SALUKIS held on to their spot in 8th place overall this week. Next week, however, they may have trouble pulling off that same feat. They are in serious danger of falling down in four separate categories- batting average, home runs, saves, and wins. Falling back in each of those spots would leave SALUKIS with 46 category points overall, and likely put them in 9th place.

Woman of the Hour

SPACE COWBOYS showed, once again, how it’s supposed to be done this week. They racked up a league-high 73 category points. Coach Denton’s squad finished in first for the week in batting average and wins by putting up a .311 BA and 4 wins, while coming in 2nd in RBIs and saves. As a result, SPACE COWBOYS are tops in the league overall. 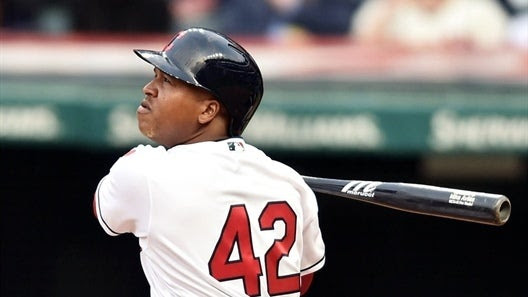 Jose Ramirez showed up to play , as he batted .516, cranked out 3 home runs, and tallied 7 RBIs

Jose Ramirez had a big week for DEADWOODS, helping them get the biggest boost in the rankings.

Putting up 8 stolen bases, 45 RBIs, and 5 wins pushed SPACE COWBOYS to the top of the pile.

Mookie Betts is the main reason for DEADZONES’s jump in the rankings, as he launched 3 home runs, hit .387, and totaled 5 RBIs.

Coming up with a .339 BA, 11 stolen bases, and 6 wins allowed DEADWOODS to rocket up five slots in the power rankings.

SMOKING GUNS’s performance this week was a big turnaround from last week’s disappointment, allowing them a bump in the power rankings.

TEABAGGERS have now had to deal with seven straight weeks where Darwin Barney has underperformed his positional average.

James Paxton was incandescent to start the season, but this new post-DL version hasn’t been serving ARMCHAIR SLUGGERS very well at all.

SALUKIS have been enjoying the services of Brad Brach, who has given them five straight weeks of above-average roto performance.

Trey Mancini is on a nice trajectory for Colt 45s, improving his performance in our roto player metric for three straight weeks.

SHAMS is moving up largely on the strength of their performance in the RBIs category, where they have notched 119 RBIs over the past three weeks.

Only coming up with 3 HRs, 0 saves, and a .216 BA caused MASTERBLASTERS to careen down three spots in our power rankings.

After only managing 1 stolen base, 2 wins, and a 1.49 WHIP, we peg SCHNOOKERS as the least powerful team around.

Photo by USATSIDEADWOODS has now improved their overall ranking each week for the past two straight weeks. They can attribute the move to good performances in three stat categories, including moving up two places in batting average. Jose Ramirez was the leader in that area for DEADWOODS this week, hitting .516 to go along with 3 home runs and 7 RBIs. Ramirez’s performance ended a seven game streak of failing to hit his projections.

SKINS‘s belly-itchers had all sorts of trouble in the ERA department and finished with a less-than-spectacular a 8.72 ERA. That’s the worst result that any team this season has had in the ERA category. Buck Farmer stuck out as the worst performer for SKINS, producing a 25.07 ERA in 4 and 2/3 innings. No surprise then, SKINS dropped two spots in the ERA standings (now 5th), 0.07 ERA behind SMOKING GUNS. SKINS also fell from 1st to 2nd in the overall rankings.

SCHNOOKERS’s bad season got a whole lot worse this week. They fell in behind all other teams, earning only 33.5 category points. SCHNOOKERS wound up in last place for the week in stolen bases by putting up 1 stolen base, and also finished 11th in batting average and 10th in RBIs. They stayed in 11th place in the overall standings this week.

Ryon Healy had a big week for SKINS, helping them get the biggest boost in the rankings.

SPACE COWBOYS have been the best in the league this season in the RBIs category, and topped the league in that category again this week.

Logan Morrison is on a disturbing slide, doing worse in our roto player metric in each of the last three weeks.

Only coming up with 2 stolen bases, 24 RBIs, and a 1.40 WHIP caused TEABAGGERS to careen down three spots in our power rankings.

DEADZONES have been enjoying the services of Miguel Sano, who has given them seven straight weeks of above-average roto performance.

Coming up with a 2.20 ERA, 13 HRs, and a 1.16 WHIP allowed SCHNOOKERS to rocket up three slots in the power rankings.

MASTERBLASTERS is moving up largely on the strength of their performance in the stolen bases category, where they have recorded 18 stolen bases over the past three weeks.

SALUKIS had a great week last time the rankings were compiled, but fell off big time afterwards.

After only managing 0 saves, 1 win, and 2 stolen bases, we peg SHAMS as the least powerful team around. 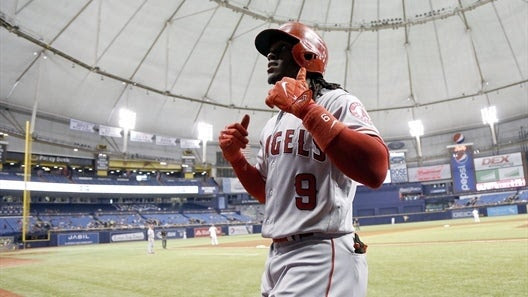 Photo by USATSIDEADWOODS pulled off some master thievery this week, racking up 13 stolen bases. Center fielders Cameron Maybin and Delino DeShields were the prime movers for DEADWOODS, recording 6 and 5 stolen bases, respectively. DeShields’ performance this week stopped his four game streak of not meeting his projections. As a result, DEADWOODS now sits at the top of the stolen bases standings. 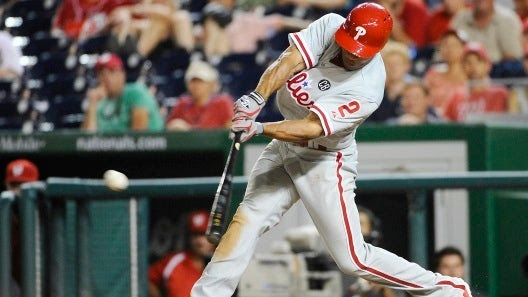 SCHNOOKERS have fallen for two weeks in a row now, going from 10th to 11th. They dropped due to slides in three stat categories, including a six spot fall in batting average. Ben Revere loomed large in the result, hitting .000. Revere might be heading back to the waiver wire after getting picked up before this game.

The Past is Past

ARMCHAIR SLUGGERS apparently didn’t gain any momentum from last week’s 14 home run performance. They had a week to forget, tallying only 5 HRs. Coaches Jim Rodrigues and Paul Keriazes’ squad suffered from ten zeros in that category, one of which came from Jean Segura, who also batted .000 and totaled 0 RBIs. That caused ARMCHAIR SLUGGERS to fall from 4th to 6th in the HRs standings, 2 HRs behind SALUKIS. In addition, ARMCHAIR SLUGGERS fell from 3rd to 4th in the overall rankings.

MASTERBLASTERS managed to pull off a strange feat this week: they did well in ERA while doing poorly in WHIP. In the ERA category, they moved into 10th place after sporting a 2.52 ERA. Meanwhile, in the WHIP category, they fell down one spot to 11th place this week after notching a 1.57 WHIP.

SKINS are contenders for the title because of weeks like this. They topped all other teams for the week, earning 70.5 category points. Coaches Mark Hodgkins and Frank Grzegorzewski’s squad won the week in saves and WHIP after putting up 5 saves and a 1.15 WHIP, while also finishing in 2nd in RBIs and home runs. As a result, SKINS moved up in the overall rankings from 2nd to 1st. 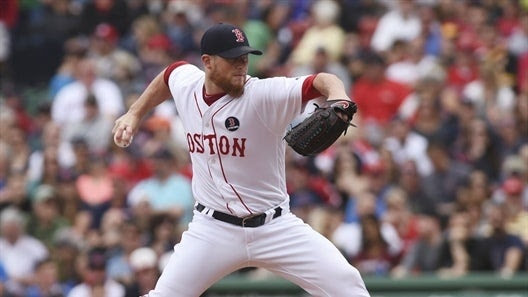 Craig Kimbrel showed up to play this week, as he logged 3 saves

Craig Kimbrel had a big week for TEABAGGERS, helping them get the biggest boost in the rankings.

ARMCHAIR SLUGGERS have been enjoying the services of David Price, who has given them seven straight weeks of above-average roto performance.

Coming up with 14 HRs, 4 saves, and 41 RBIs allowed SPACE COWBOYS to rocket up four slots in the power rankings.

SKINS have now had to deal with seven straight weeks where Alcides Escobar has underperformed his positional average.

Only coming up with 0 saves, 1 win, and a 1.62 WHIP caused SMOKING GUNS to careen down four spots in our power rankings.

SALUKIS put up big numbers last week, and followed that up with yet another huge performance this week.

SCHNOOKERS has struggled big time recently in the WHIP category, where they have racked up a 1.55 WHIP in 15 innings over the past three weeks.

MASTERBLASTERS dropped and no one is more to blame than Danny Farquhar, who recorded a 23.63 ERA, tallied a 3.38 WHIP, and totaled 0 saves.

At this point, it’s questionable whether Masahiro Tanaka belongs in SHAMS’s lineup at all.

12 (12) DEADWOODS
DEADWOODS hasn’t had an above average team performance in six weeks.

The King is Dead 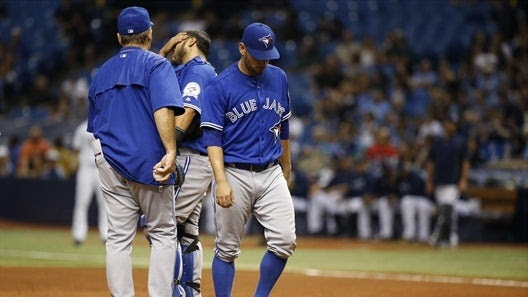 Photo by USATSISKINS fell off their perch at the top of the league and into 2nd place overall. They dropped in two stat categories, including moving down one spot in ERA. Marco Estrada and Alex Cobb were double trouble for SKINS, together producing a 16.62 ERA in 8 and 2/3 innings. Estrada’s performance this week definitively broke his three game streak of surpassing his projections.

MASTERBLASTERS made up for their lackluster 22 RBI performance last week with a top-notch performance in the category this week. Their batters didn’t leave their teammates hanging as they accumulated 57 RBIs. That’s the best result that any team this season has had in the RBIs category. That Hank Aaron-esque performance pushed MASTERBLASTERS from 11th to 10th in the RBIs standings. 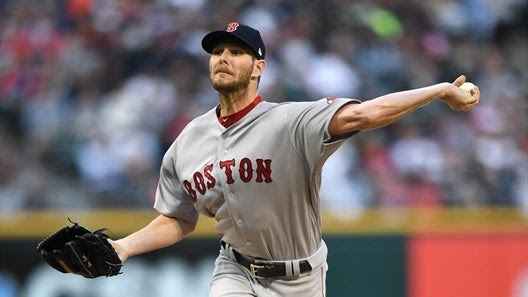 DEADWOODS swapped places with SMOKING GUNS in the pitcher wins standings, with DEADWOODS moving from 7th to 4th and SMOKING GUNS moving from 4th to 7th. DEADWOODS pulled that off by posting 6 wins this week. Chris Sale separated himself from the rest of the crew on DEADWOODS, notching 2 wins. Meanwhile, ARMCHAIR SLUGGERS tallied only 5 wins due to poor performances from Jharel Cotton, Sonny Gray, and Martin Perez, who each went winless.

SHAMS‘s pitchers threw a party on the basepaths this week, recording a 1.75 WHIP in 36 innings. Two players stood out for their poor performance, with Derek Holland and Anthony Swarzak combining to record a 4.07 WHIP in 4 and 2/3 innings. Swarzak has recorded the highest WHIP of any starting player over the last three weeks. As a result, SHAMS fell from 10th to 11th in the WHIP standings, 0.02 WHIP behind MASTERBLASTERS. Things weren’t better in other categories, as SHAMS fell off a cliff in the overall standings, going from 6th to 9th.

SALUKIS didn’t make much noise this week, staying in 8th place overall. Next week, however, could be a very different story. They are in easy striking distance of moving up in six separate categories- RBIs, batting average, stolen bases, home runs, saves, and ERA. Positive moves in each of those spots would give SALUKIS 54 category points overall, and a likely 5th place position.